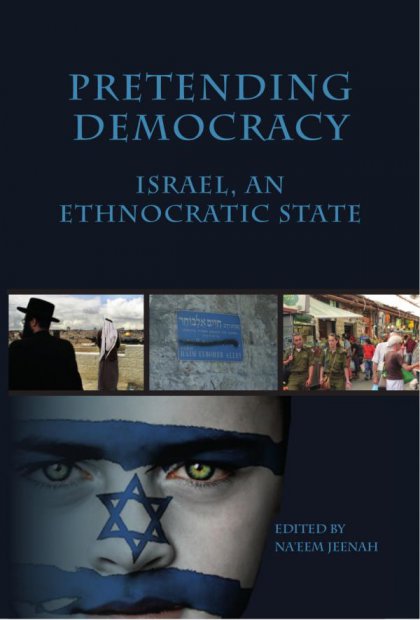 By Rod Such, The Electronic Intifada

retending Democracy: Israel, an Ethnocratic State is a collection of essays by Israeli, Palestinian and South African intellectuals dissecting the nature of the Israeli state and proposing how to get beyond the ethnic nationalism that characterizes Zionism and Israeli apartheid.

The book follows a conference held in Pretoria in 2010 by the Afro-Middle East Centre, a South African think-tank.

The argument that Israel cannot be both “Jewish and democratic,” especially when 20 percent of its citizens are Palestinian, is one that is finally beginning to resonate among US intellectuals who have long given the ideology of political Zionism a free pass because of the Holocaust.

Most recently, Joseph Levine, a philosophy professor at the University of Massachusetts, wrote an opinion piece for The New York Times challenging the idea that a state can belong to one ethnic group without, as Levine put it, “violating the core democratic principle of equality” (“Om questioning the Jewish state,” 9 March 2013).

A majority of Americans have soundly rejected its corollary — “a white, Christian and democratic country” — as a result of the struggles waged by blacks, Latinos, Asians, Native Americans and other people of color against a long-standing system of white supremacy.

So if not a democracy, then what kind of state is Israel? In this volume, several authors find common ground, though each has a slightly different emphasis.

Oren Yiftachel writes that Israel is more properly defined as an ethnocracy because the organizing principle around which the state is structured is based on what ethnic group one belongs to, rather than on citizenship.

In another essay, Nadim N. Rouhana expands on the notion of ethnocracy. Rouhana notes that the Israeli state links equality of opportunity — a concept central to a liberal democracy — to ethnic affiliation, rather than citizenship. Yiftachel and others argue that the Nakba — the 1948 ethnic cleansing of more than 750,000 Palestinians from lands in present-day Israel — is “the cornerstone of Israeli ethnocracy.” And Rouhana suggests that the only way to end the conflict is “to attack and expose” Israel’s denial of the Nakba.

South African political scientist Daryl Glaser calls Israel a “settler-minority democracy” (SMiD). A SMiD, he writes, is a democracy for the European or European-sponsored settlers who established colonies in circumstances where they were outnumbered by the indigenous people but still managed to dominate them.

Glaser argues that Israel was at one point a “settler-majority democracy” from 1948 to 1967 but managed to once again become a SMiD by occupying the West Bank and Gaza. It is therefore “a democracy for some and a dictatorship for others, its ethnic oligarchy beset by permanent demographic panic.”

Ronnie Kasrils believes that Israel fits the definition of “colonialism of a special type.” For Kasrils, “it is essential to grasp the colonial factor” to understand that the Palestinian struggle “is a national liberation struggle … against a colonial-settler project” that claims “democratic rights exclusively for its own group. It is the settlers’ racist, colonialist agenda that is the fundamental cause of the conflict,” he writes, “as was the case in South Africa.”

Pretending Democracy goes beyond simply examining the nature of the Israeli state. It offers valuable ideas for ending Israeli apartheid and the denial of Palestinians’ right to self-determination.

Ran Greenstein proposes an alliance between Palestinian and progressive Jewish Israelis that could acquire the leverage needed to help start changing the Israeli regime from within. Along these lines, Fouad Moughrabi finds hope in an emerging Israeli “new left” that speaks a “dramatically different” language: “The old slogans for peace have been replaced with a call for an end to injustice.” He even envisions a third intifada that might be a joint Jewish-Palestinian uprising.

Ali Abunimah, in his essay, “Towards a One-State Solution in Palestine/Israel,” addresses the argument that Jewish Israelis will never agree to renounce an ethnic state and give up their privileges. He notes that polls of white South Africans showed entrenched opposition to the concept of one person, one vote even up to the eve of the dismantling of apartheid.

What was key, Abunimah argues, was the apartheid state’s loss of legitimacy in the international arena, a process that is also beginning to weaken Israel. “Zionism,” he writes, “will never be able to bomb, kidnap, assassinate, expel, demolish, settle and lie its way to legitimacy and acceptance.”

Pretending Democracy is unique in addressing the national question as it relates to Palestine and Israel. Zionists have long argued that Jews have simply exercised their right to self-determination in establishing the State of Israel and that the concept of a Jewish state has international legitimacy by virtue of the 1947 United Nations resolution partitioning Mandate Palestine.

The latter argument suffers many flaws, including the circumstances surrounding the UN vote, the fact that the resolution created a state for Jews “residing” in Palestine, not for Jews throughout the world, and the fact that Israel violated most of the provisions of the partition resolution regarding the rights of Arabs in the new Israeli state.

But many people concur that Jews in Palestine deserved the right of self-determination as understood in international law. By including a chapter from Shlomo Sand’s The Invention of the Jewish People and an essay by Na’eem Jeenah and Salim Vally, Pretending Democracy raises the question, albeit indirectly, of whether Jews represent an oppressed nation or a persecuted people.

Sand’s research has challenged the Zionist historiography that attempts to re-imagine the history of the Jewish people as a centuries-long struggle for nationhood, rather than as a struggle against racist and religious persecution.

As Jeenah and Vally show, the question is not just academic. No one envisions a solution — whether two states, one state, or a bi-national state — that denies rights to Jewish Israelis. Nevertheless, they argue that a bi-national state, which assumes the existence of two nations, will ultimately subvert the creation of a democratic, secular state by reinforcing division.

The Zionist argument that only state power can protect Jews from persecution has long since proved morally and politically bankrupt. The logical consequence of a Jewish state was the racist dispossession of the indigenous Palestinian Arab majority and the creation of a militaristic, ethnic supremacist state.

There is probably no such thing as a safe refuge. There is only perpetual struggle against racism and inequality, a struggle that is most likely to be won in a society that values diversity and democracy.

* Rod Such is a freelance writer and former editor for World Book and Encarta encyclopedias. He is a member of the Seattle Mideast Awareness Campaign and Americans United for Palestinian Human Rights.