Sudan lies in the hotbed of the Horn of Africa, a region that has been plagued by decades of instability and ruin as a result of intense conflicts perpetuated by post-colonial vestiges, ethnic rivalries and competition for key resources. The region is centred along three geostrategic crossroads, flanked by the Bab el-Mandab strait in the Red Sea, positioned in close proximity to the Arabian Peninsula and the Gulf of Aden; at the meeting point of the White and Blue Nile; and a transit point between Africa and the Mediterranean. Neighbouring countries beleaguered by failing states, civil wars and counter-revolutionary dictatorships render the regional stability fragile.

While Sudan is not new to conflict and transformation, the recent revolutionary movement has shaken the foundations of power and forced Sudanese to revaluate and question the legitimacy of the power structures. The civil uprising and the demand for changing the course of history is indicative of a new, youthful yearning for a future devoid of the authoritarian system designed to quell the voices of the people.

As Sudanese come to terms with the brutal crackdown on protestors on 3 June 2019 and  revel in the euphoric hopes for a peaceful transition, on a macro level, these developments have ushered in a significant shift in the balance of powers in the region and has resulted in the adoption by global actors of aggressive tactics to secure their interests. At the core of the competing agendas lies hegemonic ambitions of the USA, China and Russia; while Middle Eastern players appear to have found a new front to stage their rivalries.

Until recently, the USA was unrivalled in its exertion of influence over the region in the name of the War on Terror, under the authority of AFRICOM, through which it sought to “neutralize transnational threats” advance American interests and build defence outposts, namely Camp Lemonnier in Djibouti. Pariah status was conferred on Sudan, designated as a State sponsor of Terror, with comprehensive sanctions imposed until 2017. Soon after the removal of former President Omar Al Bashir from power, a senior American delegation was deployed to Khartoum for engagement with the Transitional Military Council. Last month, the State Department confirmed that Donald Booth has been named as Special Envoy for Sudan, tasking him with leading US efforts to support a political solution to the current crisis.

With the proliferation of Chinese military and naval facilities in the Horn of Africa initially on the pretext of anti-piracy, and now in line with the Belt and Road Initiative, American influence seems to be waning. The People’s Liberation Army Navy (PLAN) deployed to the Gulf of Aden receives strategic support from their base in Djibouti. The base is seen as a vital part of the String of Pearls network of military and commercial bases throughout the Indian Ocean Rim. Chinese economic interests in Sudan are deeply entrenched, with Chinese investments in infrastructure projects, as well as trade. In 2018, China was the only country to transfer arms to Sudan. At the start of the uprisings in Sudan, China maintained a cautious silence on the developments until former President Omar Al Bashir was officially removed from power. The Chinese are now carefully monitoring developments to ensure that their economic interests are secured.

Countries in the European Union traditionally portrayed themselves as the peace-makers in the region, offering capacity and institution-building in post-conflict reconstruction and development, often with condescension of “we know and you know not”. As increasing numbers of Africans began to traverse great distances to escape their war-torn homes or to seek refuge and economic prosperity in Europe, the EU’s focus on Eritrea and Sudan altered significantly. Sudan stood as a buffer zone between refugees/migrants and the crossing points along the Mediterranean. Sudanese troops were deployed to the border regions with Eritrea and Libya to prevent the movement of people. With the advent of the revolution, the EU is watchful of developments and how this may impact on their quest to curb migration from Africa.

Russia is a relative newcomer to Africa but seems to be developing a firm foreign policy to counter-balance American and European/French neo-colonial ambitions. Russia and Sudan cultivated an alliance between 2017 and 2018, as the two countries cooperated in brokering a peace deal in Central African Republic. Indications are that Russia seeks to advance its presence in Africa by building relations with several countries, including Sudan. The Russian military presence in CAR not only provides access to the region, but also presents Russia with an opportunity to enhance its economic footprint through acquiring lucrative mining deals. During a visit to Russia in 2017, former President Al Bashir intimated that Sudan could be the key for Russia to enter Africa. During that visit, a concession agreement for gold mining was signed. Reports have emerged that Russian forces were deployed to Sudan to train Sudanese security officials shortly thereafter.

Recent leaked documents allege that in 2018 Russia drew up a programme for economic reform in Sudan, designed to keep Omar Al Bashir in power. Upon recognising the inevitable ousting of Al Bashir, the document was altered and Russian advisors urged the TMC to suppress activists by toughening penalties for participating in unauthorised meetings and gathering, freezing independent media, improving the quality of pro-government media and limiting the influence of opposition press, increasing the costs of newsprint to control print media, detaining coordinators and leaders of protests, define the concept of a “foreign agent”,  and monitoring social media.

In addition to the standard measures to overcome the crisis, the leaked document suggests the discrediting of protestors by disseminating information on the arson of a mosque, hospital, kindergarten, and the theft of grain from the state repository or to cast the protesters as “enemies of Islam and traditional values” by spreading fake news about meetings with LGBTQ flags. This tactic would be designed to provoke conflict between protest groups and disorganise the protests. Finally, the leaked dossier alleges that plans were designed to punish those responsible for the protests, seen to be traitors to the Motherland; and suppression of activists through “minimal but acceptable loss of life”.

Perhaps the most interesting interventions in respect of the Sudanese uprisings have come from the Middle East. Concerns arose shortly after the massacre in June that Saudi Arabia and the United Arab Emirates were responsible for the adoption of violent tactics by the TMC, as just days before, leaders of the TMC met with the Saudi and UAE leadership, securing an aid package of $3 billion, 66% of which would be allocated to military and security expenditure. The Saudi-UAE alliance has relied heavily on Sudanese troop deployment as part of the Saudi-led coalition in the war in Yemen. Apart from the proxy war between Saudi Arabia and Iran playing out in Yemen, Sudan has also been central to rivalry, as Saudi Arabia urged Sudan and Eritrea to sever ties with Iran.

The clout of the Gulf States lies in their oil-rich economies, enabling them to buy influence beyond their borders and assert themselves as players in the international arena. As the war in Yemen enters its fourth year, Saudi Arabia and the UAE have recognised the strategic value of military outposts across the Red Sea. The UAE is the most aggressive in securing contracts for the establishment of bases in the Horn of Africa. It is projecting itself to dominate the maritime domain, having begun with training and development of anti-piracy forces in Puntland and later with securing contracts for the establishment of bases in Somaliland and Eritrea, from which it has launched attacks on Yemen.  The UAE aims to develop and control ports along the Arabian peninsula and the Red Sea, thereby projecting its influence throughout the region.

The projections by the UAE and Saudi Arabia in the Horn of Africa are also influenced by the rift within the GCC, as the blockade countries (UAE, Saudi Arabia, Egypt and Bahrain) seek to limit Qatar’s reach. Qatar had strong relations with Sudan in the past, as it acted as mediator and host of negotiations between the Sudanese government and representatives of the Darfur region. Qatar had enjoyed cordial relations with Eritrea and other regional partners. Investments from the GCC were initially focussed on food security, with the purchase of large tracts of agricultural land. As the rift within the GCC intensified, Saudi Arabia and the UAE exerted greater political influence in the Horn, through the brokering of the rapprochement between Ethiopia and Eritrea and with outreach to Sudan. These moves also coincided with the strategic need for partners in the region close to Yemen.

Qatar’s influence in the region has decreased since the blockade against it led by Saudi Arabia and the UAE. Last month, reports emerged that the TMC snubbed the Qatari Minister of Foreign Affairs who requested a meeting with the Sudanese interim leadership. Qatar, together with Turkey have a contract to rebuild Suakin Island port on the Red Sea coast that was aimed at boosting tourism but would have a dual purpose of acting as a military base for Turkey.

Egypt, allied closely with Saudi Arabia and the UAE is Sudan’s immediate neighbour. The Egyptians will be watching closely the developments in Sudan, for fear of another uprising the likes of the Arab Spring. Egypt would also be concerned as to how the situation in Sudan would impact on the water security as it pertains to the Nile and the debates by the Nile riparian states for increased shares to the nile waters.

The Egyptian example must remain prominent in the minds of the interim Sudanese leadership. Transitions from revolutionary movements to civilian governments are not palatable to those who seek control and power. Most of the global players may find comfort with dictators and could potentially implant the ideas that Africans and Arabs cannot self-govern and therefore should be led by the military. Whilst the negotiations on the constitutional declaration appear to be gaining momentum and there are calls for peaceful democratic transfer of power to a civilian-led government, the Sudanese people must be cautious and wary of saboteurs. Deals are already being struck away from the negotiating table and lobbyists are positioning themselves to secure contracts that could be detrimental to Sudan, whilst lining the pockets of corrupt officials.

Lucrative offers will certainly continue to present themselves as Sudan enters the transitional period. Investments of the nature outlined above may appear very attractive for those seeking to address the economic challenges facing Sudan, however most of the deals come with hefty prices that may threaten the sovereignty and security of Sudan. Advantages and disadvantage would have to be weighed, bearing in mind the disproportionate relationships. The revolution must not be sold to the highest bidder and the integrity of the struggle for freedom must be paramount. 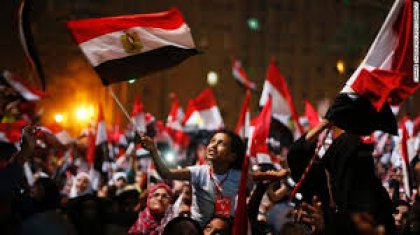 AMEC will host a one-day symposium on 28 January 2014 to discuss possible futures for Egypt. It will bring together a number of prominent Egyptians who are now part of the opposition to the coup, as well as other commentators. The key issues to be discussed at the symposium include: circumstances surrounding the July 2013 coup; the role, mechanisms, influence and future trajectory of the 'deep state'; the opposition to the coup and the current state of repression; the military ‘roadmap’ and other scenarios for Egypt’s future.