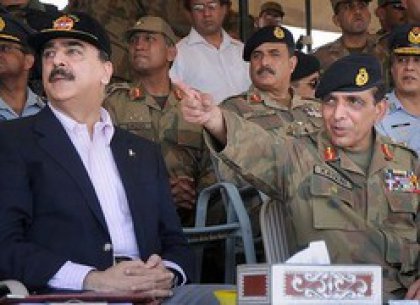 With relations between Pakistan's civilian government and military incredibly tense, speculation is rife in the Pakistani and international media of a looming military takeover. The military is allegedly buoyed by support of the Supreme Court and the country's business and political elite. However, the nature of events is changing at such a fast pace that it is difficult to predict the future.

The tenuous relationship between the government and the military appears to have finally eased somewhat since the government markedly toned down its anti-military rhetoric. Indeed, Prime Minster Yousuf Raza Gilani has extended an olive branch of sorts to the military. He had previously accused Army Chief of Staff, General Ashfaq Parvez Kayani, and the head of Pakistan's principal intelligence agency, Lieutenant General Ahmad Shuja Pasha, of acting unconstitutionally when they expressed their alleged disapproval of the government. Just before Gilani left for the World Economic Forum in Davos in the middle of February, he attempted to smooth over the difficulties with his comment that he wanted to 'dispel the impression that the military leadership acted unconstitutionally or violated rules... The current situation cannot afford conflict among the institutions.'