Death of a Saudi king: Palace intrigue and policy implications 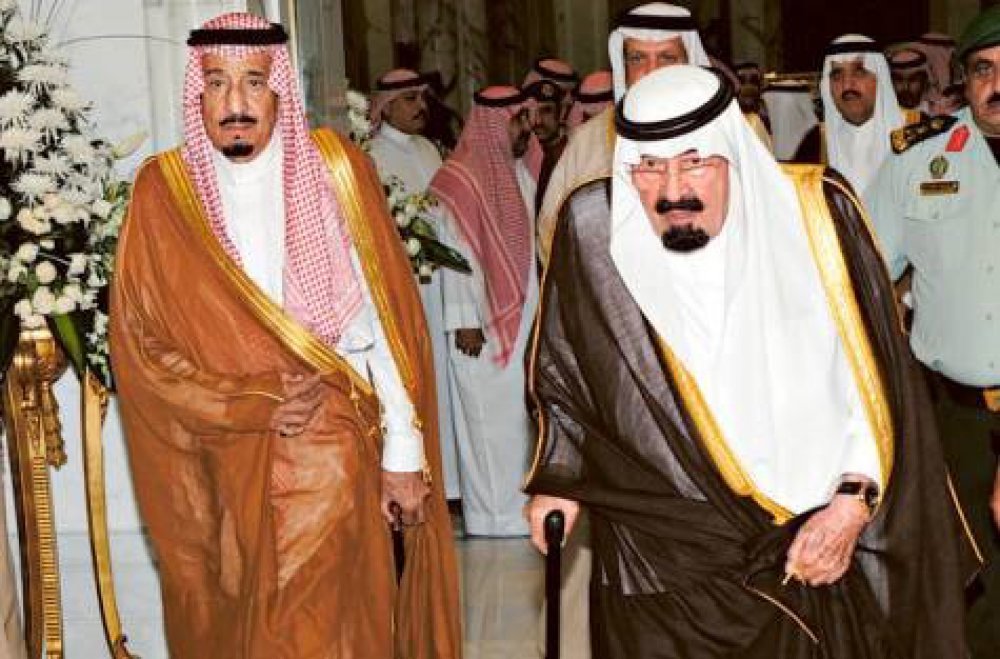 Published in The Gulf

The death of Saudi King Abdullah on 23 January, and the ascension to the throne of his half-brother Salman have generated a flurry of discussions and speculation globally. Much attention has being paid to gestures of condolences, and comments about Abdullah’s legacy and achievements (including some western leaders’ assertions of Abdullah as a ‘reformer’). The conversations have also included reflections on royal succession and the potential for Saudi domestic and foreign policy changes. The issue of succession has been feverishly discussed for the past few years, dogged by the question of who among the grandsons of the founder of the Saudi monarchy, Abdulaziz al-Saud, would reign and when that might happen. Among many commentators there is an impression that this succession question has been resolved because Salman’s appointment of Muhammad bin Nayef as the new deputy crown prince was seemingly accepted without dissent by members of the royal family.

Such a view, however, misses the rumblings within the Saudi family that run deeper than the supposedly calm process that preceded the announcement of the new deputy crown prince, and which could lead to major fault lines developing between the royals. An indication of this is the intrigue that surrounded the announcement and Abdullah’s funeral, and attempts by Salman to shift influence within the royal family in a manner that could have important foreign policy implications.

When Salman was confronted by some royals regarding his announcement of the new deputy crown prince, he revealed that he had already consulted the Allegiance Council, the body appointed by Abdullah and having the responsibility of approving the selection of a crown prince. In fact, before announcing his decision, Salman had individually lobbied various members of the council and obtained their support for bin Nayef’s appointment. He did this while keeping the new crown prince, Muqrin, and the former secretary of the royal court under Abdullah, Khalid al-Tuwaijri, in the dark. Salman’s stealth indicates that he does not see eye to eye with Muqrin, and that he regards Muqrin and Tuwaijri as part of an opposition camp. They both would have preferred Abdullah’s son and the current minister of the National Guard, Mu't', to be appointed as deputy crown prince. It is rumoured that Tuwaijri, who was Abdullah’s main confidante and the person making domestic and foreign policy in the last few years, is under house arrest and will likely quietly disappear from the political scene.

Apart from bin Nayef’s appointment, Salman rapidly announcing other appointments, such as the dual elevation of his son, Muhammad bin Salman, to the position of defence minister – replacing Salman, and as secretary general of the royal court, in Tuwaijri’s stead, are an attempt to marginalise the Abdullah circle within the ruling elite of Saudi royals. Further evidence of this was the removal of two of Abdullah’s sofrom their positions as governors of the Riyadh and Makkah provinces. The governorship of Makkah was returned to Khalid bin Faisal, from whom it was taken away by Abdullah two years ago, while Riyadh is now in the hands of Faisal bin Bandar. Similarly, another third generation Saudi royal who was close to Abdullah, Bandar bin Sultan, who had been increasingly at odds with bin Nayef over their different approaches to the Syrian crisis, was removed from his roles as the secretary general of the National Security Council and advisor to the king. Additionally, the National Security Council was dissolved, and Salman formed two new councils, the Council for Political and Security Affairs and the Council for Economic and Development Affairs; the former is headed by bin Nayef, and the latter by Salman’s son Muhammad.

With Salman attempting to move away from certain of Abdullah’s policies, a shift in some foreign policy aspects is likely to become visible in the next few months. Some of this is based on his desire to change Abdullah’s policy; but other factors include his political sympathies which differ from Abdullah’s, and his personal relationships with other political figures in the region. As a result, while Saudi policy on Syria is unlikely to change, the rest of this year is likely to witness a change in Saudi Arabia’s support for the post-coup Egyptian government, and in its formerly close alliance with the United Arab Emirates. One indication of this change was Salman’s communication to both the Egyptians and Emiratis that the Egyptian president, Abdel Fatah el-Sisi, and the UAE crown prince, Mohammed bin Zayed al-Nahyan, would not be welcome at Abdullah’s funeral, while he warmly welcomed their rival, Turkish president Recep Tayyip Erdogan, who remained in the kingdom for an extra day to discuss regional security matters with the new king. Salman even received Iranian foreign minister Mohammad Javad Zarif at the funeral.

On Egypt, Salman has indicated that aid from Saudi Arabia to that country’s military government will cease. The Saudis have already given Egypt between ten and twenty billion dollars in aid over the past eighteen months. His decision seems to be based partly on his discomfort with propping up the Egyptian regime further, and partly due to a very negative relationship that has developed between him and Sisi. The negative relationship intensified over the past few months, particularly with Sisi’s comments to various people that he and the Emiratis would like to see a rapid transfer of power after Abdullah’s death to Muqrin, effectively bypassing Salman. Furthermore, Sisi also, prior to Abdullah’s death, sent messages to Tuwaijri supporting Muqrin’s ascension to the throne, and even committed Egyptian troops to ensure that the ascension would be smooth, if the need for such a step arose. The relationship between Salman and Sisi will thus be difficult to repair. In Salman’s eyes, bin Zayed is also part of this alleged conspiracy. Furthermore, the new deputy crown prince, bin Nayef, has a severe dislike for bin Zayed, originating from comments the latter made and revealed by WikiLeaks, where he severely insulted bin Nayef’s father.

Another area of policy change, though unlikely to be very visible, is the new Saudi government’s attitude towards the Muslim Brotherhood (MB). In March 2014, Saudi Arabia followed the UAE in designating the Brotherhood a terrorist organisation. At the time, Salman had indicated to some Brotherhood leaders that he personally did not regard the movement as ‘an enemy’. Although it is unlikely that he will suddenly change that designation, there will probably be an increased tolerance of the MB by the Saudis. Bin Nayef, who is responsible for the Saudi role in the war against the Islamic State group (IS), also believes that tolerating the Brotherhood could assist in that war because the MB is less dangerous than the IS. This perception has been reinforced by the surge in IS’s popularity in Saudi Arabia, and IS’s habit of accusing Saudi Arabia of being close to western powers and Israel, and of supporting dictatorial oppression in the Middle East. And this week Saudi foreign minister, Saud al-Faisal, said, ‘There was no problem between the Kingdom and [Brotherhood] movement,’ and that the problem was only with a few MB. Apart from the political reasons, Salman also has a good relationship with Erdogan and a fifteen-year-long close relationship with Sheikh Hamad bin Khalifa al-Thani, the former emir of Qatar, and father of the current emir. Both the Turkish and Qatari leaders have sympathies for the MB. Indications are, therefore, that Saudi Arabia, under Salman, will look to mend its ties with the MB-affiliated versions of republican Sunni Islam, such as Erdogan’s AK Party in Turkey and Hamas in Palestine, and others that support them, such as Qatar, at the expense of those who are unwilling to accommodate them. Qatar is, it seems, reading the situation in this manner, and has indicated that it will allow back into the country senior MB leaders that had previously been asked to leave as a result of Saudi and Emirati pressure.

One area of the new Saudi foreign policy which remains unclear is the relationship with Iran. There are pressures on Salman both to improve relations with Iran and to maintain the status quo. The pressure to better their relationship comes from, first, the possibility of an impending deal between Saudi ally, USA, and Iran on the nuclear and other issues. If such a deal happens in the next few months, there will be pressure from the USA for Saudi Arabia, Turkey and Iran to work together in the region to maintain a balance of power. Second, the dire situations in Syria, Iraq and Lebanon call out for an end to the cold war between regional hegemons Saudi Arabia and Iran, and the current conjuncture points to the need for a cooperative relationship in order to develop a joint strategy for confronting the IS threat. On the other hand, Salman and bin Nayef are close to conservative sections of the Saudi clergy, which are virulently anti-Shi'a and for whom restoring relations with Iran is anathema. Further, if Saudi Arabia mends relations with Iran it might reinforce the perception that the regime is a puppet of imperialist powers, and provide grounds for IS sympathies to spread. Salman will seek to cleverly navigate these imperatives, but it is difficult to predict the future direction of this relationship.

Saudi Arabia, then, could see some serious changes within its ruling and policymaking structures, and its domestic and foreign policies. The public silence of the Saudi family cannot be taken as an indicator of the level of internal fighting. However, while the family is known for its secrecy, the younger generation of royals is becoming more vocal in criticising the old guard. All of this is likely to create a more robust debate over the future of the kingdom, albeit behind high palace walls. While it may be slow in coming, one can be sure that the Abdullah-aligned faction must be contemplating an appropriate riposte to Salman’s machinations. However, those who expect rapid and sudden changes in policy will be disappointed. Saudi Arabia is a large and difficult ship to steer. Sudden changes rarely occur, and amendments to policy usually are preceded by wide turns rather than sharp jerks.