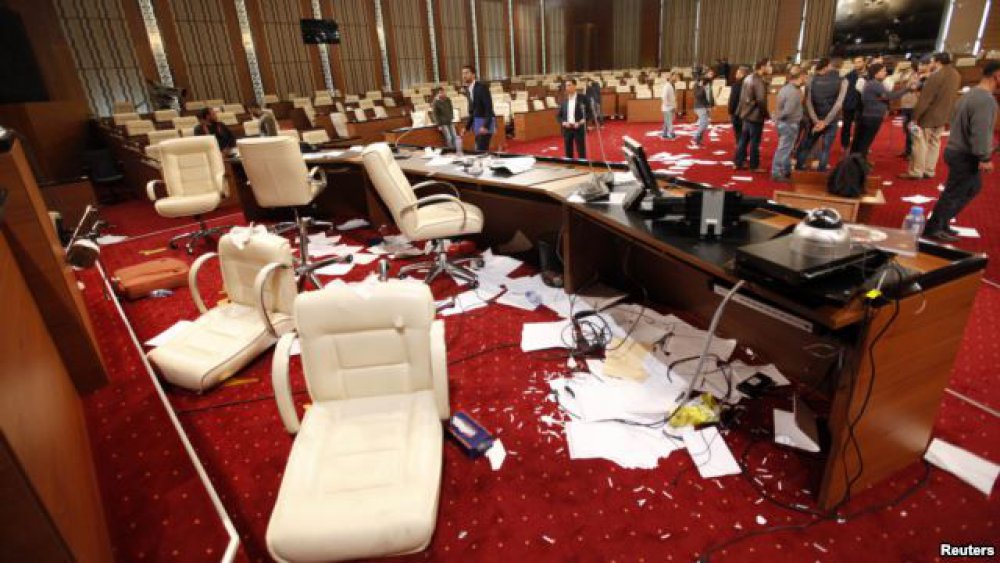 The GNC’s ineffectiveness has led to disillusionment and apathy among Libyans, who have experienced a deterioration in security, electricity and water shortages, and decrepit public institutions. The apathy was illustrated by the 20 February constitutional assembly elections for a sixty-member constitutional drafting committee. Only a third of Libyans had registered to vote, and only forty-five percent of them voted.

A consequence of the feeling of hopelessness has been the growth of movements for autonomy or federalism in the south and east. Before Muammar Gadhafi’s coup in 1969, Libya had comprised of three regions: Tripolitania in the west, Fezzan in the south, and Cyrenaica in the east. Under the 1951 constitution, these had been recognised as pseudo-federal entities. The activities of these movements, especially the powerful Barqa Cyrenaica political office headed by former militia commander Ibrahim Jathran, created the conditions leading to Zeidan’s unexpected ouster.

Disgruntled with the GNC’s unwillingness and inability to form an independent institution to evaluate oil contracts, and to ensure a more regionally equitable distribution of oil revenue, the ‘Cyrenaica National Council’ in June 2013 declared the eastern region autonomous. Two months later, the Barqa political office took control of three oil fields in the east which pumped over sixty per cent of Libya’s oil output. This placed enormous strain on the treasury, which depends on oil for ninety per cent of its budget.

The situation peaked on 10 March, when a North Korean ship, the Morning Glory, set sail from Es Sider port in eastern Libya with 30 million dollars’ worth of Barqa-controlled oil. Having previously threatened military force against tankers exporting oil from federalist-controlled regions, the Libyan navy unsuccessfully attempted to stop the tanker. The government also announced the formation of a force with Libyan army officers and allied militia mandated to recapture federalist-controlled ports and oil facilities. With the federalists refusing to relent, the stage has been set for military confrontation which risks expanding into an extended east vs. west conflict and a splitting of the country. It is doubtful whether the country can amass a force large and capable enough to recapture the oilfields when the government largely owes its existence to militia groups. Over 17 000 armed men make up the ‘Petroleum Facilities Guards’ who have seized these fields, and have the support of militia and tribesman from the East and from Zintan.

The Zeidan government had previously withstood such pressures, fearing that they would inflame the already-tense relationship between the east and the central government. It toughened its stance in the wake of the Morning Glory affair, but failed to achieve anything. In response, and for the first time, the GNC worked as a unit and not factionally to jettison the premier.

The political polarisation is unlikely to recede soon, not until Libyans develop a strong national identity, and institutions are created to define and separate the various state powers. The current stand-off and federalist inclinations can be mitigated through the incorporation of Libyan tribes into the governance process. Holding a national dialogue and instituting a transitional justice process which results in tribal elements playing a role in the country could be beneficial. The federalists realised this last year. In December 2013, an agreement between Jathran and the head of the eastern Maghraba tribe, Saleh Latwaish, provided the possibility for the eastern oil fields to start pumping again. However, because of the political isolation law enacted under pressure from militias in May 2013, tribesmen such as Latwaish cannot officially be incorporated into any governance structure. Further, the GNC, being more concerned with internal problems and factionalism, has not conceptualised a process to deal with federalist groups in the country. The legitimate demand that an oversight body be set up and corruption in oil contracts be investigated has not been met, for examp